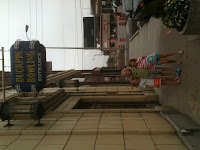 The cats got me up early this morning, so I'm using the time to catch up on The Indiana You Don't Know (TIYDK) entries: two more in the continuing series of escapades that are substituting for a family vacation this year.  Truth is, we're enjoying them so much that this may just be a continuing series period, as we're now envisioning going to a wolf howl, Biblical gardens, and (creeeeepy) a doll factory in the fall.  All states/cities/environments have these places off the beaten path, and I realize now that my seeking them out has as much to do with the materiality studies and ecocriticism I'm reading as with taking the kids out for a good time. It's the idea that networks shaped by more/other than human will have created scenarios whose reality doesn't mesh seamlessly with its surroundings. Oh my dear children: what does it bode for you that my recent purchase of In a Pickle was completely motivated by Ian Bogost's awesome description of the game in Alien Phenomenology?  But back to duckpin bowling.  My brother and his beautiful growing family were in town and, in addition to being an awesome Soviet historian, he is also a baseball and duckpin bowling fan. No problem finding a baseball game (whose laid-back, relaxed two-and-a-half-hour (!) rain delay showed me again that baseball brings out the gentler more lyrical side of American culture).  But a pleasant surprise to find a duckpin bowling alley right in the Fountain Square neighborhood of Indianapolis! 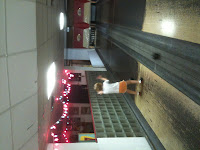 I think that my favorite thing about nostalgia is how kids' imperviousness to it (it's new to them!) makes them slip right into a space hallowed by commemoration.  Duckpin bowling came into prominence in Baltimore, MD around 1900 and came to Indianapolis in 1928.  The usual series of downfalls and closings ensued, and it re-opened in 1994, fully refurbished in a blend of 1930s and 1950s decor.  Everything is done according to specifications (there is a National Duckpin Bowling Congress after all), and we quickly came to love the smaller balls, the three turns you get when you're up, and the plump little pins that are, in fact, harder to knock down.  Yours truly incongruously scored a spare (don't quite know where to put that in the big picture).  I should say little kids' imperviousness to nostalgia.  Eleanor strode right in, but Oliver and Iris both commented on the "old" stuff (Oliver's unerring aesthetic sense took in everything from the trim to the benches; Iris just loved the jukebox and how it dropped the small records into place as it played).  At what point do you see old? At what point do you know something is not from your time?

One could well ask this question of temporal and physical perception in the Bluespring Caverns near Bedford, Indiana.  These caverns came to light in 1947 after a heavy storm created enough pressure to push through an opening at the bottom of a farmer's pond.  What had been a pleasant pond was completely drained into the cavern overnight and became an enormous sinkhole.  I can't help but think of the farmer's awakening to his utterly transformed landscape, his pond drained "like a bathtub," said our guide. Unlike the Squire Boone Caverns which lay in wait behind thickets of foliage, these caverns burst forth unexpectedly, messing with perception and expectation, setting the tone in their emergence for what became our experience of them.  They're all water for one thing - there is no ground to walk on.  You go 120' underground, enter a flat boat, and then glide along these corridors lined by stone formations which extend dozens of feet beneath the water line.  To float above the earth's ever-receding surface this way is disorienting, almost disembodying - there is no ground to stand on here and (yes yes, it's true) I thought immediately of Grendel's mother's watery lair.  Are there caverns like this in the land whence Grendel came? (I know that this leads to "Is Beowulf mimetic, then?" but we don't have to go there now). What brave warrior indeed would swim through these waters lighting his way with a torch? What water demon wouldn't thrive here?

There are the same geological formations (straw stalactites and flow stones) that we saw at Squire Boone Caverns, but it all seems muted somehow, by the water and the low ceiling and tight corridors.  It's much darker here, and I realized how much the careful lighting at Squire Boone created a mood.  Here, the only lighting came from the lights on the boat - the light moved with us, and any look back was completely engulfed in an impenetrable darkness. Seeing was done in glimpses and was unaccompanied by touch (our fingers being capable of creating havoc in the ecosystem of the cave, we were asked not to touch).  If we had been able to touch, I would have been in for the shock of my life much earlier.  As he spoke of the caverns and their shapes and their matter, the guide revealed that we were near the limestone capital of Indiana (and beyond), that there were massive amounts of limestone here.  Strange, I thought, how even the color of limestone (which is near white at times) has become a muted brown down here.  Oh, and I should add: there is no algae, and very little life (transparent and blind fish and crawfish) down here. So the space around me positively morphed when the guide told us that the entirety of the cavern stone is encased in mud.

Mud, mud, mud - everywhere mud! A thick inches-thick layer of it coating everything! If you look to the far right of the image here, you can see where a passing boat has bumped into the wall and scratched the mud away to the white limestone.  What I thought had been hard rock would have softly pressed in had I touched it.  Savvy Mac collected some of the mud that had scraped onto the boat and gave it to me: it was cool and springy, utterly un-rock-like. The guide said it was "glacial mud," but when I search the term, I get Alaskan beauty products - an option not explored by our Indiana guide. He also referred to it as "peanut butter mud," but I don't even need to tell you that all I'm getting are brownie recipes when I search that.  I'll be meeting with my geologist friend today, and will ask him oh yes absolutely.  Some of this mud is surely deposited by rising waters, but once I could see what I was actually looking at, I realized that this mud is about 5 inches thick on the surface - what time is marked there? and also by the curves (the sculpting!) of the corridors?

There's something to register here about privately owned Indiana natural landmarks. There is very little mystique, and much love of effect. Recall the revving of the motorcycles to get the lions to roar at the Exotic Feline Rescue Center.  Here, we came to a huge stone dubbed the Rock of Gibraltar which created a sonar surface.  "Y'all want to hear some sound?" asked the guide?  Gulp. Yes? I know that there would be gentler, more poetic ways to demonstrate how sound moves 350' down a watery cavern corridor, but I can't think of anything that will beat the thunderous effect of our guide slamming one of the square boat seat cushions on the bottom of the boat as hard as he could to make his point. Damn, that was loud.  The physicality of the sound (around my cheeks, through my legs, in the grip of Eleanor's hand) was tremendous as it hurtled madly through the space, bouncing off that crazy thick mud, surely rippling the water as it went.  I would give anything for an image of that sound moving through space. Grendel's mother again.  After the slammed seat cushion sound experiment, our guide turned off all the lights, and I sat in complete, palpable, mind-numbing darkness for the first time in my life. Why does the dark make us quiet? Sure it's some primordial instinct (although I'm so skeptical of the extreme historicism of those) to keep quiet because predators see better in the dark than we do, but we're not afraid of predators, we're in a little boat with a seat-cushion slamming, good-time guide. We were a little floating sociological experiment - completely hushed by the surrounding darkness and the limpid sounds of water shifting around us, until a child broke the silence, and then our relief rippled through to fight the dark.  The guide said that in two or three weeks we would go blind down here (I assume this would come after going stark raving mad). I almost immediately couldn't tell if my body was huge or puny, if I was seated or standing - Oliver spoke of floating. The lights came back on and the guide pointed out a rock that looked like an elephant - a comforting moment of recognition in this (yes) unfathomable scenario. 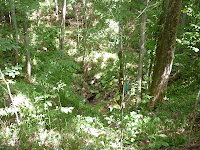 And then outside, taking huge gulps of warm air, and holding Eleanor close while Iris asked what's next and Oliver wanted to go back inside.  We found a hike, a small trail that looped around a "sinkhole forest."  An entire ecosystem that has grown up around a cavern entrance too small for us to fit in (but apparently they're excavating it to pierce through to where you could!).  You can just barely see the entrance there at the bottom; what the camera can't convey is the vertiginous slope down to the sinkhole.  What the camera also can't convey is Eleanor's screeching phobia of spiders which we discovered when we discovered the spiders as we were sliding down the sinkhole.  My poor darling - I had no idea I could crawl up the side of a sinkhole with a 40 pound child on my back at any speed.  Spiders make the ground shift under your feet, and that was just one too many for her.  Solid ground and dinner in a Turkish restaurant in Bloomington made it all better.  Simple, but telling, moves to bury Grendel's mother and keep the spiders away.
Posted by Anne at 7:42 AM No comments: